Most trumpeters are more or less tense when practising and playing. For many, it is just annoying and spoils the joy of making music. It also affects the quality of the playing and relaxation exercises often won’t do the trick.

In the professional sector, many occupational illnesses are due to long-term chronic tensions and, for example, resulting joint damage. But even the majority of back pain could be avoided if the issue of tension was addressed appropriately.

Tensions are unwanted, permanent muscle contractions that restrict mobility and functionality – often in places that do not even need to be activated to play the trumpet (e.g. shoulders).

For musicians, tension has two aspects:

Symptom-oriented strategies, such as relaxation or shoulder circles, usually bring only short-term relief and are therefore unsuitable as a permanent solution. Let’s take a look at the possible causes of tension.

Be honest, how many people do you know who aren’t already tense during normal sitting? Usually, they are very few if any. So even normal standing or sitting is not without tension for most people. How then can they possibly succeed if a complex activity such as playing the trumpet is added?

How does this come about? There are innumerable possible reasons and one aspect I would like to mention here is the cultural habit of getting yourself backwards out of balance. Almost all chairs are constructed sloping backwards, making it almost impossible to sit upright on them. So you inevitably have to

After thousands of hours of sitting at school, we all have forgotten how it used to be when, as small children, we had a natural uprightness.

Instead, we then start to train back muscles or we develop concepts of what a “good posture“ is, and usually just bring ourselves further away from the lost naturalness. We have either sunk down or are holding ourselves upright with muscles that are not meant to be used for this purpose, which is why it is so exhausting. Tension becomes inevitable as a result.

In the course of time, we develop conscious or unconscious ideas about how the playing of our instruments work. However, these concepts often have little in common with reality. There are countless examples of this:

Many such concepts arise in the classroom and are often unavoidable, for it is not only what someone says that matters, but also how it is understood, over which a teacher has only limited influence.

And now there is a law of movement that says that the body always tries to implement the idea(!) of a movement. This applies even if the idea does not correspond to reality!

This explains why countless regions that have nothing to do with making music itself are tense when playing. One tries to “breathe into the abdomen“ or to make the wrist turn or to “keep“ the shoulders down (usually by “pulling“) and therefore uselessly contract a great variety of muscles.

Every musician wants to play well and tries hard accordingly. It often happens that you put yourself under psychological pressure, which of course also finds its physical equivalent. The original intention to play well becomes a permanent pressure – mentally and physically. The result is tension.

Trumpeters need the assurance that they will hit the high note. Now an increased body tension gives you the feeling of control. Of course, this is an illusion, but subjectively you feel more secure when the muscle tone is increased. So apparent you find security in tension, which is often difficult to change, because the alternative of letting go and trusting that the body is able to implement what you have learned, is difficult and initially makes you afraid. No wonder that this leads to permanent tension when playing music.

Another Aspect are unpleasant Feelings such as

The first reaction to such feelings is usually rejection. You want to hide the feeling, eliminate it, get rid of it. However, this is a hopeless undertaking, because you cannot switch emotions on and off or change them as you wish.

So the feeling is there on the one hand and on the other hand, you don’t want it. This internal conflict also leads to increased muscle tone. Often the situation does not change for a long time, because for example, the next concert date is already fixed and thus the stage fright is just around the corner. Reason enough to learn to make the handling of emotions more constructive in order to avoid such conflicts gradually and permanently.

The topic of tension is a constantly present and extensive issue for musicians and cannot be dealt with by well-meaning advice “to relax“. It needs a radically honest look at the causes so that one can make appropriate changes. Since habits often play an important role, a certain amount of training is necessary to bring about lasting positive changes.

This webinar can be your first step. Click here! 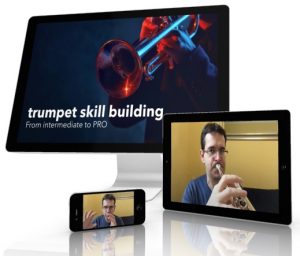 0 comments on “Less tension when playing the trumpet”